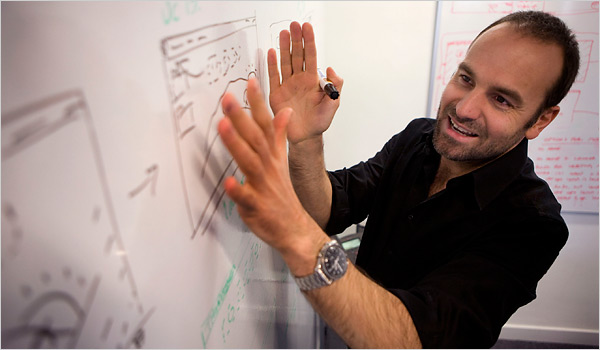 I probably don’t have to present Mark Shuttleworth… he was already a Debian developer when he became millionaire after having sold Thawte to Verisign in 1999. Then in 2002 he became the first African (and first Debian developer) in space. 2 years later, he found another grandiose project to pursue: bring the Microsoft monopoly to an end with a new alternative operating system named Ubuntu (see bug #1).

I have met Mark during Debconf 6 in Oaxtepec (Mexico), we were both trying to find ways to enhance the collaboration between Debian and Ubuntu. The least I can say is that Mark is opinionated but any leader usually is, and in particular the self-appointed ones! 🙂

Read on to discover his view on the Ubuntu-Debian relationship and much more.

Mark: At heart I’m an explorer, inventor and strategist. Change in technology, society and business is what fascinates me, and I devote almost all of my time and wealth to the catalysis of change in a direction that I hope improves society and the environment.

I’m 38, studied information systems and finance at the University of Cape Town. My ‘hearts home’ is Cape Town, and I’ve lived there and in Star City and in London, now I live in the Isle of Man with my girlfriend Claire and 14 precocious ducks. I joined Debian in around 1995 because I was helping to setup web servers for as many groups as possible, and I thought Debian’s approach to packaging was very sensible but there was no package for Apache. In those days, the NM process was a little easier 😉

Raphael: What was your initial motivation when you decided to create Ubuntu 7 years ago?

Before Ubuntu, we have a two-tier world of Linux: there’s the community world (Debian, Fedora, Arch, Gentoo) where you support yourself, and the restricted, commercial world of RHEL and SLES/SLED. While the community distributions are wonderful in many regards, they don’t and can’t meet the needs of the whole of society; one can’t find them pre-installed, one can’t get certified and build a career around them, one can’t expect a school to deploy at scale a platform which is not blessed by a wide range of institutions. And the community distributions cannot create the institutions that would fix that.

Ubuntu brings those two worlds together, into one whole, with a commercial-grade release (inheriting the goodness of Debian) that is freely available but also backed by an institution.

The key to that dream is economics, and as always, a change in economics; it was clear to me that the flow of money around personal software would change from licensing (“buying Windows”) to services (“paying for your Ubuntu ONE storage”). If that change was coming, then there might be room for a truly free, free software distribution, with an institution that could make all the commitments needed to match the commercial Linux world. And that would be the achievement of a lifetime. So I decided to dedicate a chunk of my lifetime to the attempt, and found a number of wonderful people who shared that vision to help with the attempt.

It made sense to me to include Debian in that vision; I knew it well as both a user and insider, and believed that it would always be the most rigorous of the community distributions. I share Debian’s values and those values are compatible with those we set for Ubuntu.

“Debian would always be the most rigorous of the community distributions.”

Debian on its own, as an institution, could not be a partner for industry or enterprise. The bits are brilliant, but the design of an institution for independence implies making it difficult to be decisive counterparty, or contractual provider. It would be essentially impossible to achieve the goals of pre-installation, certification and support for third-party hardware and software inside an institution that is designed for neutrality, impartiality and independence.

However, two complementary institutions could cover both sides of this coin.

Many people are starting to understand this: Ubuntu is Debian’s arrow, Debian is Ubuntu’s bow. Neither instrument is particularly useful on its own, except in a museum of anthropology 😉

So the worst and most frustrating attitude comes from those who think Debian and Ubuntu compete. If you care about Debian, and want it to compete on every level with Ubuntu, you are going to be rather miserable; you will want Debian to lose some of its best qualities and change some of its most important practices. However, if you see the Ubuntu-Debian ecosystem as a coherent whole, you will celebrate the strengths and accomplishments of both, and more importantly, work to make Debian a better Debian and Ubuntu a better Ubuntu, as opposed to wishing Ubuntu was more like Debian and vice versa.

Raphael: The Ubuntu-Debian relationship was rather hectic at the start, it took several years to “mature”. If you had to start over, would you do some things differently?

Mark: Yes, there are lessons learned, but none of them are fundamental. Some of the tension was based on human factors that cannot really be altered: some of the harshest DD critics of Canonical and Ubuntu are folk who applied for but were not selected for positions at Canonical. I can’t change that, and wouldn’t change that, and would understand the consequences are, emotionally, what they are.

Nevertheless, it would have been good to be wiser about the way people would react to some approaches. We famously went to DebConf 5 in Porto Allegre and hacked in a room at the conference. It had an open door, and many people popped a head in, but I think the not-a-cabal collection of people in there was intimidating and the story became one of exclusion. If we’d wanted to be exclusive, we would have gone somewhere else! So I would have worked harder to make that clear at the time if I’d known how many times that story would be used to paint Canonical in a bad light.

As for engagement with Debian, I think the situation is one of highs and lows. As a high, it is generally possible to collaborate with any given maintainer in Debian on a problem in which there is mutual interest. There are exceptions, but those exceptions are as problematic within Debian as between Debian and outsiders. As a low, it is impossible to collaborate with Debian as an institution, because of the design of the institution.

In order to collaborate, two parties must make and keep commitments. So while one Debian developer and one Ubuntu developer can make personal commitments to each other, Debian cannot make commitments to Ubuntu, because there is no person or body that can make such commitments on behalf of the institution, on any sort of agile basis. A GR is not agile ;-). I don’t say this as a critique of Debian; remember, I think Debian has made some very important choices, one of those is the complete independence of its developers, which means they are under no obligation to follow a decision made by anyone else.

So in order to have great collaboration between Ubuntu and Debian, we need to start with mutual recognition of the value and importance of the differences in our approach. When someone criticises Ubuntu because it exists, or because it does not do things the same way as Debian, or because it does not structure every process with the primary goal of improving Debian, it’s sad. The differences between us are valuable: Ubuntu can take Debian places Debian cannot go, and Debian’s debianness brings a whole raft of goodness for Ubuntu.

Mark: Internal tension about the vision and goals of Debian make it difficult to create a harmonious environment, which is compounded by an unwillingness to censure destructive behaviour.

Many of these metrics are in direct tension with one another; as a consequence, the fact that different DD’s prioritise all of these (and other goals) differently makes for… interesting debate. The sort of debate that goes on and on because there is no way to choose between the goals when everyone has different ones. You know the sort of debate I mean 🙂

Mark: Yes, I think some of the areas that concern me have improved. Much of this is to do with time giving people the opportunity to consider a thought from different perspectives, perhaps with the benefit of maturity. Time also allows ideas to flow and and of course introduces new people into the mix. There are plenty of DD’s now who became DD’s after Ubuntu existed, so it’s not as if this new supernova has suddenly gone off in their galactic neighbourhood. And many of them became DD’s because of Ubuntu. So at least from the perspective of the Ubuntu-Debian relationship, things are much healthier.

We could do much better. Now that we are on track for four consecutive Ubuntu LTS releases, on a two-year cadence, it’s clear we could collaborate beautifully if we shared a freeze date. Canonical offered to help with Squeeze on that basis, but institutional commitment phobia reared its head and scotched it. And with the proposal to put Debian’s first planned freeze exactly in the middle of Ubuntu’s LTS cycle, our alignment in interests will be at a minimum, not a maximum. Pure <facepalm />.

Raphael: What would you suggest to people (like me) who do not feel like joining Canonical and would like to be paid to work on improving Debian?

Mark: We share the problem; I would like to be paid to work on improving Ubuntu, but that’s also a long term dream 😉

Raphael: What about using the earnings of the dormant Ubuntu Foundation to fund some Debian projects?

Mark: The Foundation is there in the event of Canonical’s failure to ensure that commitments, like LTS maintenance, are met. It will hopefully be dormant for good 😉

Mark: Crowdfunding is a great match for free software and open content, so I hope this works out very well for you. I also think you’d find a bigger market for an Ubuntu book, not because Ubuntu is any more important than Debian but because it is likely to appeal to people who are more inclined to buy or download a book than to dive into the source.

Again, this is about understanding the difference in audiences, not judging the projects or the products.

Mark: Zack is the best DPL since 1995; it’s an impossible job which he handles with grace and distinction. I hope praise from me doesn’t tarnish his reputation in the project!

Thank you to Mark for the time spent answering my questions. I hope you enjoyed reading his answers as I did.