You are here: Home / Archives for GNOME

With the increasing number of paid contributors, easy fixes (CVE with patches available) tend to be processed rather quickly. All the package I worked on had issues that were open for a long time because they were hard to handle.

I prepared DLA-613-1 fixing 3 CVE on roundcube. The fix required to manually backport the CRSF handling code which was not available in the wheezy version. I spent almost 8 hours on roundcube.

I uploaded a new gnome-shell-timer that would work with GNOME 3.21 that had been uploaded to sid.

Unfortunately, that new GNOME (and GTK+) version caused many regressions that affected Debian Testing (and thus Kali) users in particular in gnome-control-center. I uploaded a new version fixing some of those issues and I reported a bunch of them to upstream too (#771515, #771517, #771696).

I worked on #836211 creating a dpkg patch to work-around the overlayfs limitation (we use it in Kali because persistence of live system relies on overlayfs) and I contacted the upstream overlayfs maintainer to hopefully get a proper fix on the overlayfs side instead.

Debian Handbook. I enabled the new Vietnamese translation on debian-handbook.info and updated all translations with Weblate updates.

Hindsight packaging. I first packaged lua-sandbox (#838969) — which is a dependency of Hindsight — and then Hindsight itself (#838968). In this process, I opened a couple of upstream tickets.

Bugs filed. Bad homepage link in haskell-dice-entropy-conduit. Inconsistent options --onlyscripts and --noscripts in debhelper. pidgin entry in security-support-limited is out of date in debian-security-support. New upstream version (2.0.2) in puppet-lint.

I handled a new LTS sponsor that wanted to see wheezy keep supporting armel and armhf. This was not part of our initial plans (set during last Debconf) and I thus mailed all teams that were impacted if we were to collectively decide that it was OK to support those architectures. While I was hoping to get a clear answer rather quickly, it turns out that we never managed to get an answer to the question from all parties. Instead the discussion drifted on the more general topic of how we handle sponsorship/funding in the LTS project.

Fortunately, the buildd maintainers said they were OK with this and the ftpmasters had no objections, and they both implicitly enacted the decision: Ansgar Burchardt kept the armel/armhf architectures in the wheezy/updates suite when he handled the switch to the LTS team, and Aurélien Jarno also configured wanna-build to keep building armel/armhf for the suite. The DSA team did not confirm that this change was not interfering with one of their plans to decommission some hardware. Build daemons are a shared resource anyway and a single server is likely to handle builds for multiple releases.

This month I registered for DebConf 16 and submitted multiple talk/BoF proposals:

I want to share the setup we use in Kali as it can be useful for other derivatives and also for Debian itself to help smooth the relationship with derivatives.

I also want to open again the debate on the usage of money within Debian. It’s a hard topic but we should really strive to take some official position on what’s possible and what’s not possible. With Debian LTS and its sponsorship we have seen that we can use money to some extent without hurting the Debian project as a whole. Can this be transposed to other teams or projects? What are the limits? Can we define a framework and clear rules? I expect the discussion to be very interesting in the BoF. Mehdi Dogguy has agreed to handle this BoF with me.

Unfortunately, when I wanted to upload it to unstable, the test suite did not ran. I pinned this down to a sqlite regression. Chris Lamb filed #820225 and I contacted the SQLite and Django upstream developers by email to point them to this issue. I helped the SQLite upstream author (Richard Hipp) to reproduce the issue and he was quick to provide a patch which landed in 3.12.1.

GNOME 3.20. As for each new version, I updated gnome-shell-timer to ensure it works with the new GNOME. This time I spent a bit more time to fix a regression (805347) that dates back to a while and that would never be fixed otherwise since the upstream author orphaned this extension (as he no longer uses GNOME).

I have also been bitten by display problems where accented characters would be displayed below the character that follows. With the help of members of the GNOME team, we found out that this was a problem specific to the cantarell font and was only triggered with Harfbuzz 1.2. This is tracked in Debian with #822682 on harfbuzz and #822762 in fonts-cantarell. There’s a new upstream release (with the fix) ready to be packaged but unfortunately it is blocked by the lack of a recent fontforge in Debian. I thus mailed debian-mentors in the hope to find volunteers to help the pkg-fonts team to package a newer version…

Distro Tracker. I started to mentor Vladimir Likic who contacted me because he wants to contribute to Distro Tracker. I helped him to setup his development environment and we fixed a few issues in the process.

Bug reports. I filed many bug reports, most of them due to my work on Kali:

I also investigated #819958 that was affecting testing since it has been reported to Kali as well. And I made an NMU of dh-make-golang to fix #819472 that I reported earlier.

This month I have been paid to work 13.25 hours on Debian LTS. During this time I worked on the following things:

I also started a conversation about what paid contributors could work on if they have some spare cycle as the current funding level might allow us to invest some time on work outside of just plain security updates.

I spent quite some time finalizing the Jessie book update, both for the content and for the layout of the printed book. 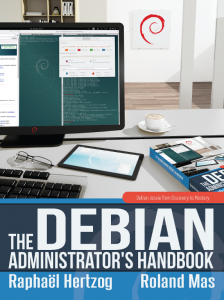 GNOME 3.18. I uploaded a new gnome-shell-timer working with GNOME Shell 3.18 and I filed bugs #800660 and #802480 about an annoying gnome-keyring regression… I did multiple test rounds with the Debian maintainers (Dmitry Shachnev, kudos to him!) and the upstream developers (see here and here). Apart from those regressions, I like GNOME 3.18!

Python-modules team migration to Git. After the Git migration, and since the team policy now imposes usage of git-dpm on all members, I made some tries with it on the python-django package while pushing version 1.8.5 to experimental. And the least I can say is that I’m not pleased with the result. I thus filed 3 bugs summarizing the problems I have with git-dpm: #801666 (no way to set the upstream branch names from within the repository), #801667 (no clean way to merge between packaging branches), #801668 (does not create upstream tag immediately on tarball import). That is on top of other randomly stupid bugs that were already reported like #801548 (does not work with perfectly valid pre-existing upstream tags).

Django packaging. I filed bugs on all packages build-depending on python-django that fail to build with Django 1.8 and informed them that I would upload Django 1.8 to unstable in early November (it’s done already). Then I fixed python-django-jsonfield myself since Distro Tracker relies on this package.

Tryton 3.6 upgrade. I upgraded my own Tryton installation to version 3.6 and filed bug #803066 because the SysV init script was not working properly. That also reminded me that the DD process of Matthias Behrle (the tryton package maintainer) was stalled due to a bug in the NM infrastructure so I pinged the NM team and we sorted out a way for me to advocate him and get his process going…

Distro Tracker. I continued my work to refactor the way we handle incoming mail processing (branch people/hertzog/mailprocessing). It’s now mostly finished and I need to deploy it in a test environment before being able to roll it out on tracker.debian.org.

This is my monthly summary of my free software related activities. If you’re among the people who made a donation to support my work (26.6 €, thanks everybody!), then you can learn how I spent your money. Otherwise it’s just an interesting status update on my various projects.

Since Django 1.7 got released early September, I updated the package in experimental and continued to push for its inclusion in unstable. I sent a few more patches to multiple reverse build dependencies who had asked for help (python-django-bootstrap-form, horizon, lava-server) and then sent the package to unstable. At that time, I bumped the severity of all bug filed against packages that were no longer building with Django 1.7.

Later in the month, I made sure that the package migrated to testing, it only required a temporary removal of mumble-django (see #763087). Quite a few packages got updated since then (remaining bugs here).

I have worked towards keeping Debian Squeeze secure, see the dedicated article: My Debian LTS report for September 2014.

The pace of development on tracker.debian.org slowed down a bit this month, with only 30 new commits in the repository, closing 6 bugs. Some of the changes are noteworthy though: the news now contain true links on bugs, CVE and plain URLs (example here). I have also fixed a serious issue with the way users were identified when they used their Alioth account credentials to login via sso.debian.org.

On the development side, we’re now able to generate the test suite code coverage which is quite helpful to identify parts of the code that are clearly missing some tests (see bin/gen-coverage.sh in the repository).

Publican. I have been behind packaging new upstream versions of Publican and with the freeze approaching, I decided to take care of it. Unfortunately, it wasn’t as easy as I had hoped and found numerous issues that I have filed upstream (invalid public identifier, PDF build fails with noNumberLines function available, build of the manual requires the network). Most of those have been fixed upstream in the mean time but the last issue seems to be a problem in the way we manage our Docbook XML catalogs in Debian. I have thus filed #763598 (docbook-xml: xmllint fails to identify local copy of docbook entities file) which is still waiting an answer from the maintainer.

git-buildpackage. I filed multiple bugs on git-buildpackage for little issues that have been irking me since I started using this tool: #761160 (gbp pq export/switch should be smarter), #761161 (gbp pq import+export should preserve patch filenames), #761641 (gbp import-orig should be less fragile and more idempotent).