Better late than never as we say… thanks to the work of Daniel Leidert and Jorge Maldonado Ventura, we managed to complete the update of my book for Debian 10 Buster. 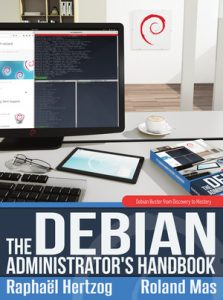 You can get the electronic version on debian-handbook.info or the paperback version on lulu.com. Or you can just read it online.

Translators are busy updating their translations, with German and Norvegian Bokmal leading the way…

Since we switched to salsa, and with the arrival of prospective GSOC students interested to work on distro-tracker this summer, I have been rather active on this project as can be seen in the project’s activity summary. Among the most important changes we can note:

I created the live-team on salsa.debian.org to prepare for the move of the various Debian live repositories. The move itself has been done by Steve McIntyre. In the discussion, we also concluded that the live-images source package can go away. I thus filed its removal request.

Then I spent a whole day reviewing all the pending patches. I merged most of them and left comments on the remaining ones:

I released a new version of live-config but wanted some external testing before releasing the new live-boot. This did not happen yet unfortunately.

I started a discussion on debian-devel about how we could handle the extension of the LTS program that some LTS sponsors are asking us to do.

The response have been rather mixed so far. It is unlikely that wheezy will be kept on the official mirror after its official EOL date but it’s not clear whether it would be possible to host the wheezy updates on some other debian.org server for longer.

I moved the git repository of the book to salsa and released a new version in unstable to fix two recent bugs: #888575 asking us to implement some parallel building to speed the build and #888578 informing us that a recent debhelper update broke the build process due to the presence of a build directory in the source package.

I moved all my remaining packages to salsa.debian.org and used the opportunity to clean them up:

Dolibarr. As a sponsor of dolibarr I filed its removal request and then I started a debian-devel discussion because we should be able to provide such applications to our users even though its development practice does not conform to some of our policies.

Bash. I uploaded a bash NMU (4.4.18-1.1) to fix a regression introduced by the PIE-enabled build (see #889869). I filed an upstream bug against bash but it turns out it’s actually a bug in qemu-user that really ought to be fixed. I reported the bug to qemu upstream but it hasn’t gotten much traction.

I filed a few bug reports:

While I continue to manage the administrative side of Debian LTS, I’m taking a break of the technical work (i.e. preparing and releasing security updates). The hope is that it will help me focus more on my book which (still) needs to be updated for stretch. In truth, this did not happen in January but I hope to do better in the upcoming months.

The switch to salsa.debian.org is a major event in our community. Last month I started with the QA team and the distro-tracker repository as an experiment. This month I took this opportunity to bring to fruition a merge between the pkg-security team and the forensics team that I already proposed in the past and that we postponed because it was deemed busy work for no gains. Now that both teams had to migrate anyway, it was easier to migrate everything at once under a single project.

All our repositories are now managed under the same team in salsa: https://salsa.debian.org/pkg-security-team/ But for the mailing list we are still waiting for the new list to be created on lists.debian.org (#888136).

As part of this work, I contributed some fixes to the scripts maintained by Mehdi Dogguy. I also filed a wishlist request for a new script to make it easy to share repositories with the Debian group.

With the expected demise of alioth mailing lists, there’s some interest in getting the Debian package tracker to host the official maintainer email. As the central hub for most emails related to packages, it seems natural indeed. We made some progress lately on making it possible to use @packages.debian.org emails (with the downside of receiving duplicate emails currently) but that’s not an really an option when you maintain many packages and want to see them grouped under the same maintainer email. Furthermore it doesn’t allow for automatic association of a package to its maintainer team. So I implemented a team+slug@tracker.debian.org email that works for each team registered on the package tracker and that will automatically associate the package to its team. The email is just a black hole for now (not really a problem as most automatic emails are already received through another email) but I expect to forward non-automatic mails to team members to make it useful as a way to discuss between team members.

The package tracker also learned to recognize commit mails generated by GitLab and it will now forward them to the source package whose name is matching the name of the GitLab project that generated them (see #886114).

Distro Tracker. I got my two first merge requests which I reviewed and merged. One adds native HTML support to toggle action items (i.e. without javascript on recent browsers) and the other improves some of the messages shown by the vcswatch integration. In #886450, we discussed how to better filter build failure mails sent by the build daemons. New headers have been added.

Bug reports and patches. I forwarded and/or got moving a couple of bugs that we encountered in Kali (glibc: new data brought to #820826, raspi3-firmware: #887062, glibc: tracking down #886506 to a glibc regression affecting busybox, gr-fcdproplus: #888853 new watch file, gjs: upstream bug #33). I also needed a new feature in live-build so I filed #888507 which I implemented almost immediately (but released only in Kali because it’s not documented yet and can possibly be improved a bit further).

While doing my yearly accounting, I opened an issue on tryton and pushed a fix after approval. While running unit tests on distro-tracker, I got an unexpected warning that seems to be caused by virtualenv (see upstream issue #1120).

This month I was allocated 12 hours but I only managed to work for 7 hours (due to vacation and unanticipated customer work). I gave back the remaining hours to the pool as I didn’t want to carry them over for August which will be also short due to vacation (BTW I’m not attending Debconf). I spent my 7 hours doing CVE triaging during the week where I was in charge of the LTS frontdesk (I committed 22 updates to the security tracker). I did publish DLA-1010-1 on vorbis-tools but the package update had been prepared by Petter Reinholdtsen.

zim. I published an updated package in experimental (0.67~rc2-2) with the upstream bug fixes on the current release candidate. The final version has been released during my vacation and I will soon upload it to unstable.

Bug reports. I filed a few bugs related to my Kali work. #868678: autopkgtest’s setup-testbed script is not friendly to derivatives. #868749: aideinit fails with syntax errors when /etc/debian_version contains spaces.