This is my monthly summary of my Debian related activities. If you’re among the people who made a donation to support my work (227.83 €, thanks everybody!), then you can learn how I spent your money. Otherwise it’s just an interesting status update on my various projects.

Thanks to Guillem, dpkg with multiarch support is now available in Debian sid. The road has been bumpy, and it has again been delayed multiple times even after Guillem announced it on debian-devel-announce. Finally, the upload happened on March 19th.

I did not appreciate his announce because it was not coordinated at all, and had I been involved from the start, we could have drafted it in a way that sounded less scary for people. In the end, I provided a script so that people can verify whether they were affected by one of the potential problems that Guillem pointed out. While real, most of them are rather unlikely for typical multiarch usage.

Bernhard R. Link submitted a patch to add a new –status command to dpkg-buildflags. This command would print all the information required to understand which flags are activated and why. It would typically be called during the build process by debian/rules to keep a trace of the build flags configuration. The goal is to help debugging and also to make it possible to extract that information automatically from build logs. I reviewed his patch and we made several iterations, it’s mostly ready to be merged but there’s one detail where Bernhard and I disagree and I solicited Guillem’s opinion to try to take a decision. Unfortunately neither Guillem nor anyone else chimed in.

On request of Alexander Wirt, I uploaded a new backport of dpkg where I dropped the DEB_HOST_MULTIARCH variable from dpkg-architecture to ensure multi-arch is never accidentally enabled in other backports.

One last thing that I did not mention publicly at all yet, is that I contacted Lennart Poettering to suggest an improvement to the /etc/os-release file that he’s trying to standardize across distributions. It occurred to me that this file could also replace our /etc/dpkg/origins/default file (and not only /etc/debian_version) provided that it could store ancestry information. After some discussions, he documented new official fields for that file (ID_LIKE, HOME_URL, SUPPORT_URL, BUG_REPORT_URL). Next step for me is to improve dpkg-vendor to support this file (as a fallback or as default, I don’t know yet).

In prevision of the next upstream version of Publican, I asked the Perl team to package a few Perl modules that Publican now requires. Less than two weeks after, all of them were in Debian Unstable. Congrats and many thanks to the Perl team (and Salvatore Bonaccorso in particular, which I happen to know because we were on the same plane during last Debconf!).

On a side note, being the maintainer of nautilus-dropbox became progressively less fun over the last months, in particular because the upstream authors tried to override some of the (IMO correct) packaging decisions that I made and got in touch with Ubuntu community managers to try to have their way. Last but not least, I keep getting duplicates of a bug that is not in my package but in the official package and that Dropbox did not respond to my query.

The translation is finished and we’re now reviewing the whole book. It takes a bit more time than expected because we’re trying to harmonize the style and because it’s difficult to coordinate the work of several volunteer reviewers.

The book cover is now almost finalized (click on it to view it in higher definitions): 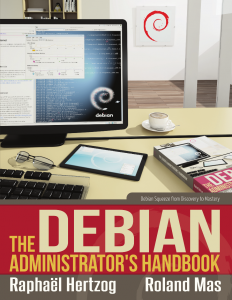 We also made some progress on the interior design for the paperback. Unfortunately, I have nothing to show you yet. But it will be very nice… and made with just a LaTeX stylesheet tailored for use with dblatex.

The liberation fundraising slowed down with only 41 new supporters this month but it made a nice bump anyway thanks to a generous donation of 1000 EUR by Offensive security, the company behind Backtrack Linux. They will soon communicate on this, hopefully it will boost the operation. It would be really nice if we managed to raise the remaining 3000 EUR in the few weeks left until the official release of the book!

The work on my book dominated the month and explains my relative inactivity on other fronts. I worked much more than usual, and my wife keeps telling me that I look tired and that I should go in bed earlier… but I see the end of the tunnel: if everything goes well, the book should be released in a few weeks and I will be able to switch back to a saner lifestyle.