This is my monthly summary of my Debian related activities. If you’re among the people who made a donation to support my work (168.12 €, thanks everybody!), then you can learn how I spent your money. Otherwise it’s just an interesting status update on my various projects.

This month, I resumed my work on dpkg. I concentrated my efforts on some “polishing” of the “3.0 (quilt)” format. With the latest version (1.16.6 — which was uploaded to unstable shortly before the freeze), dpkg-source restores the source tree in a clean state after a failed patch application (#652970), doesn’t overwrite the patch header from the pre-existing automatic patch, updates automatically debian/source/include-binaries during dpkg-source –commit, and supports a new –no-unapply-patches option for those who dislike the auto-unapplication at the end of the process when the patches were not applied at the start.

I wanted to go further and offer a new feature that could insert the automatic patch at the bottom of the quilt series but I have been short on time to complete this feature. I just managed to factorize all the quilt handling in a dedicated Perl module (Dpkg::Source::Quilt) to have cleaner code in the module handling the source format (Dpkg::Source::Package::V3::quilt).

For those who wonder, this feature is meant primarily for the X Strike Force team which maintains packages in Git and are doings lots of upstream cherry-picks (to fix regressions, etc.). But they also use quilt on top of that tree to keep some lasting Debian specific changes. With the 1.0 format, the “automatic diff” is a bit messy but at least it gets smaller automatically when a new upstream release gets out, there’s nothing to clean out. I’d like them to be able to use “3.0 (quilt)” while keeping their workflow. I’m leaning towards allowing “--auto-commit=first:cherry-picks” that would name the automatic patch “cherry-picks” and put it in the first position in the quilt series. (Opinions welcome on that feature, BTW)

There’s been quite some packaging in this last month before the freeze:

While doing all this packaging work, I found 2 possible improvements that I filed as bug reports:

From June 19th to June 21th, I manned the Debian France booth at Solutions Linux together with Carl Chenet, Tanguy Ortolo and other members of the association. We answered lots of questions, sold all t-shirts and umbrellas that Carl imported from Germany and Switzerland (we really need to get our own merchandising stuff produced in France!), got people to join the association. We also presented a printed copy of the Debian Administrator’s Handbook and of the corresponding French book.

You can see Carl, me and Tanguy on this picture (click on it to see a bigger picture, thanks to Sébastien Dubois of Evolix for this one!): 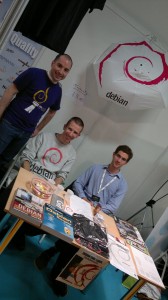 I know lots of people are preparing for Debconf but I decided to not attend this year, the price of the air plane ticket was a bit too hefty for me and it was also in partial conflict with our family vacations. I thought about attending the Libre Software Meeting instead but alas I won’t go there either (but Roland Mas will be there!), I have too much work to complete before my own vacation in 2 weeks.