This is my monthly summary of my Debian related activities. If you’re among the people who support my work, then you can learn how I spent your money. Otherwise it’s just an interesting status update on my various projects.

Right after the GNOME 3 release, I was eager to try it out so I helped the pkg-gnome team to update some of the packages. I did some uploads of totem, totem-pl-parser, gvfs, mutter, gnome-shell, gnome-screensaver. I also kept people informed via my blog and prepared a pinning file for adventurous users who wanted to try it out from experimental (like me).

One month later, I’m still using GNOME 3. There are rough edges still, but not so many. And I’m starting to get used to it.

Debian Rolling is a project on my TODO list for quite some time. I decided it was time to do something about it and started a series of articles to help clarify my ideas while getting some early feedback. My goal was to prepare a somewhat polished proposal before posting it to a Debian mailing list.

But as usual with Murphy’s law, my plan did not work out as expected. Almost immediately after my first post the discussion started on debian-devel: 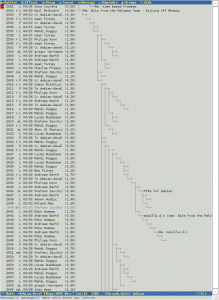 At this point it’s a discussion thread of several hundreds of messages (there are several screens of messages like the one above). Many of the sub-threads have been interesting, but the general discussions mixed too many different things so that there’s no clear outcome yet. Lucas Nussbaum tried to make a summary.

Obviously I must adjust my plan, there’s lots of feedback to process. I accepted to drive a DEP together with Sean Finney to help structure the part of the discussion that focuses on allowing development to continue during freezes. But I’m also eager to fix the marketing problem of testing and have the project recognize that testing is a product in itself and that end-users should be encouraged to use it.

The Package Tracking System is an important tool for Debian developers, and it has been broken by some change on the Bug Tracking System. I worked around it quite quickly so that few people noticed the problem but Cron kept reminding me that I had to properly fix it.

I ended up doing it last week-end. While working on the PTS, I took the opportunity to merge a patch from Jan Dittberner to enhance the news RSS feed that the PTS provides. And I also integrated information from backports.debian.org (thanks to Mehdi Dogguy for reminding me #549115).

Not much new this month. I fixed two bugs in the multiarch dpkg branch thanks to bug reports from Ubuntu users (LP 767634, LP 756381). I’m still waiting on Guillem Jover finishing his review of the multiarch branch. I’m pinging him from time to time but it looks like multi-arch is no longer in his short term priority list. 🙁

I’ve been running this code for more than 2 months and it works fine. I want to see it merged. I’m ready to update my code should anything need to be changed to please Guillem. But without any feedback we’re in a deadlock.

While fixing a bug in update-alternatives (found in one of the valid reports on launchpad), I noticed that there was room for improvements in the error messages output by update-alternatives. I changed them to reuse the same strings that were already used in other parts of dpkg. The result is that there are a few strings less to translate (always a nice thing for the poor translators who have to deal with the thousands of strings that dpkg contains).

I also tried to fix some of the most cryptic error messages in dpkg (see #621763) but that work is stalled at the request of Guillem.

We (me and Roland Mas) are almost done with the update of our French book for Debian Squeeze. It will hit the shelves in July or September. I’m starting to prepare the fundraising campaign to make an English translation of it. We’ll use ulule.com for this.

I have been pleased to interview Meike Reichle, it’s the first women that I have interviewed in the series but it’s certainly not the last one. I also interviewed Adam D. Barratt, one of our tireless release managers.