If you follow my blog closely, you noticed that I skipped all my usual monthly summaries in 2014. It’s not that I stopped doing free software work, instead I was just too busy to be able to report about what I did. As an excuse, let me tell you that we just moved into a new house which was in construction since may last year.

So let’s fix this. This report will be a bit less detailed since it covers the whole period since the start of the year.

Preparations related to general assemblies. The year started with lots of work related to Debian France. First I took care of setting up limesurvey with Alexandre Delanoë to handle the vote to pick our new logo: I also helped Sylvestre Ledru to finalize and close the accounting books for 2013 in preparation for the general assembly that was due later in the month. I wrote the moral report of the president to be presented to the assembly. And last step, I collected vote mandates to ensure that we were going to meet the quorum for the extraordinary assembly that was planned just after the usual yearly assembly.

The assemblies took place during a two days mini-debconf in Paris (January 17-18) where I was obviously present even though I gave no talk besides announcing the logo contest winner and thanking people for their participation.

It’s worth noting that the extraordinary assembly was meant primarily to enshrine in our bylaws the possibility to act as a trusted organization for Debian. This status should be officialized by the Debian project leader (Lucas Nussbaum) in the upcoming weeks since we answered satisfactorily to all questions. Our paypal donation form and the accounting tools behind it are ready.

Galette packaging and members map. I managed to hand over the package maintenance of galette to François-Régis Vuillemin. I sponsored all his uploads and we packaged a new plugin that allows to create a map with all the members who accept to share their location. The idea was to let people meet each other when they don’t live far away… with the long term goal to have Debian France organized activities not only in Paris but everywhere in France.

New contributor game. Last but not least, I organized a game to encourage people to do their first contribution to Debian by offering them a copy of my book if they managed to complete a small Debian project. We got many interesting projects but the result so far seem to be very mixed. Many people did not complete their project (yet)… that said for the few that did substantial work, it was rather good and they seem to be interested to continue to contribute.

In the last days of 2013, we released the wheezy update of the book. Then I quickly organized everything needed so that the various translation teams can now focus their efforts on the latest release of the book.

Later (in February) I announced the availability of the French and Spanish translations.

When the security team called for help to try to put in place long term support for Squeeze, I replied positively because I’m convinced that it’s very important if Debian wants to stay an acceptable choice in big deployments and because I knew that some of my customers would be interested…

Thus I followed all the discussions (on a semi-private list first and then on debian-lts@lists.debian.org) and contributed my own experience. I have also taken up the responsibility to coordinate with the Debian contributors who can be hired to work on Squeeze LTS so that we have a clear common offer for all the companies who have offered financial support towards Squeeze LTS. Expect further news on this front in the upcoming days/weeks.

I have been a long time user of SQL-Ledger to manage the accounting of my company Freexian. But while the license is free software, the project is not. It’s the work of a single developer who doesn’t really accept help. I have thus been considering to move to something else for a long time but never did anything.

This year, after some rough evaluation, I decided to switch to Tryton for my company. It’s probably not a wise choice from a business perspective because that migration took me many hours of unpaid labor but from a free software perspective it’s definitely better than everything else I saw.

I also accepted to sponsor Matthias Berhle, who is maintaining the official Debian packages of Tryton. He’s already a Debian maintainer so it’s mainly a matter of reviewing new source packages and granting him the required rights.

I just wanted to highlight that Muhammad Saied, a volunteer translator of the Debian Administrator’s Handbook, is currently running a crowdfunding campaign with Mohamed Amine so that they can complete the Arabic translation that they started.

There’s only 6 days left to collect the last $2500… click here to help spread Debian to the Arabic world. 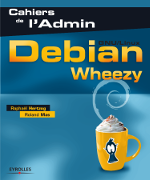 Barely one and half month after the release of the Wheezy version of the Debian Administrator’s Handbook, I’m proud to announce that two translations have been completed: French and Spanish.

And, as promised in the last liberation campaign, the French translation has been published as a paperback by Eyrolles (see the cover above).

Check out the article on debian-handbook.info for more information.

This is my monthly summary of my free software related activities. If you’re among the people who made a donation to support my work (147.56 €, thanks everybody!), then you can learn how I spent your money. Otherwise it’s just an interesting status update on my various projects.

I spent a good chunk of December on the book. First finalizing the English version and getting it out (BTW, just for the launch, there’s a 10% discount on the paperback that lasts only until January 9th!). Then working on updating the French translation. Eyrolles will publish a new edition of the French book based on this translation. Expect some further news about this during January!

I contributed to many discussions within Debian France.

Starting with a complaint that most events are organized in Paris, I proposed to map the location of Debian France members. We added new fields in the membership management page so that members can add their GPS coordinates and Frédéric Decou made some experiments with Openstreetmap. Someone else (Kiriarat) volunteered to write the required glue code. A manual map is currently maintained on the website.

In the discussions about the setup of the Debian France shop, I suggested to update our logo with a nicer looking one. We got a few suggestions and after further discussions with Alexandre Delanoë and Sylvestre Ledru, we organized a small contest to entice designers to submit a logo proposal to us (the winner earns a set of Debian goodies). We got 46 proposals (see my favorite on the right)! The board is currently pre-selecting the logos and setting up the final vote for our members. The winner shall be announced at the end of the upcoming mini-debconf in Paris.

I also continued the work to finalize new bylaws and new internal rules. They shall be adopted during the next general assembly which will happen during the mini-debconf.

WordPress maintenance. I mentored Pablo Vasquez to do his first small contribution to the WordPress packaging. I really appreciate this but he’s not yet ready to assume maintenance of a big package like WordPress on his own. I got multiple other offers of help and pinged them all while filing #733726 to coordinate the work on the new upstream version. But I got no reply 🙁 Handing over packages to new maintainers is hard…

Init system discussion. The technical committee has the hard task of picking the default init system that will replace the traditional System V init (see #727708). I followed this huge discussion closely and contributed a bit where I add something meaningful to say. Final decision is expected sometimes in January. FWIW, I share entirely Russ Allbery’s point of view in those discussions. I have been running systemd on some of my computers for a few months already.

Fixing lxc in stable. The lxc package in stable has a non-working “debian” template. I really dislike documenting that things are broken so instead of doing that in the Debian Administrator’s Handbook, I opted to do something about it. I prepared a non maintainer upload for stable (see #680469 for the problem and #732358 for the stable update request).

Misc stuff. I sponsored a tcpdf upload. I filed an enhancement request on Publican to have it keep processing instructions present in translations. I uploaded new versions of publican-librement and debian-handbook. I filed #732678 against git-buildpackage because it failed to properly call lintian when given the -A dpkg-buildpackage argument.