You are here: Home / Archives for d-i

This is my monthly summary of my free software related activities. If you’re among the people who made a donation to support my work (102.70 €, thanks everybody!), then you can learn how I spent your money. Otherwise it’s just an interesting status update on my various projects.

Work on Galette. I spent quite some time on Debian France’s galette installation (the web application handling its member database), first converting its Postgres database to UTF-8, then upgrading to 0.7.4 while working-around many known problems.

But every time I use galette, I tend to find something to report. This month I filed 5 tickets:

I tested quite some fixes prepared by the upstream author (3 of the above bugs are already fixed) and this lead to the 0.7.4.1 bugfix release.

Preliminary work on new bylaws. I have setup a git repository to make it easier to collaborate on new versions of our bylaws and internal rules. The goal is to make Debian France a trusted organization of Debian and to update everything to be compliant with the “association 1901” law (we currently have a special statute reserved to associations from Alsace/Moselle).

Improve accessibility support in Debian Wheezy. Offensive Security wanted Kali Linux to be fully accessible to disabled people. Since Wheezy was suffering from some serious regressions in that area, we hired Emilio Pozuelo Monfort to fix #680636 and #689559 in gdm3. On my side, I updated debian-installer’s finish-install to correctly pre-configure the system when you make an install with speech synthesis (patch submitted in #705599).
Thanks to accommodating release managers, this work has already been integrated in Wheezy and won’t have to wait the first point release.

Fix bugs in Debian’s live desktop installer. We also wanted to enable the desktop installer in the Kali live DVD. While our first tries a few months ago failed, this time it worked almost out of the box (thanks to Ben Armstrong who fixed it). I still identified a few issues that I fixed in debian-installer-launcher’s git repository.

I also spent a significant number of hours to answer questions of students who want to participate in Google’s summer of code and who are interested by the rewrite of the Package Tracking System with Python and Django. Some of the discussions happened on debian-qa@lists.debian.org.

This is my monthly summary of my free software related activities. If you’re among the people who made a donation to support my work (114.19 €, thanks everybody!), then you can learn how I spent your money. Otherwise it’s just an interesting status update on my various projects.

I tried to use wheezy’s version of debian-cd and simple-cdd to generate an automatic installer. In this process, I filed a couple of bugs on simple-cdd (#701963: type-handling package is gone and should not be listed in default.downloads, and #701998: the --keyboard parameter is not working with wheezy’s debian-installer) and I commited fixes for a few issues in debian-cd:

I completed the new website for Debian France and I put it online. Later I merged some supplementary enhancements prepared by Tanguy Ortolo (and I gave him commits rights at the same time).

I tried to update our Galette installation to the latest upstream version but I reverted to the former version after having encountered two problems (filed here and here). In the process, I created a Debian package for galette (you can grab it on git.debian.org).

I also suggested an idea of improvement for Galette’s paypal plugin and it has been quickly implemented. Thus I updated the plugin installed on france.debian.net.

It’s been a few months that I have been helping the Kali team to prepare this new Debian derivative. Now that the derivative has gone public, I can attribute some of my Debian work to my collaboration with the Kali team.

This month I contributed a few features and fixes to debian-installer and live-build:

After the launch, we registered Kali in the derivative census. Paul Wise quickly reported some misfiled bugs from early Kali users and I discovered that reportbug was not behaving properly even though we correctly updated base-files (see #703678 on reportbug and #703677 on lsb-release).

This was a rather active month if you take into account the fact that I got a second son — Lucas — on March 6th.

This is my monthly summary of my free software related activities. If you’re among the people who made a donation to support my work (836.78 €, thanks everybody!), then you can learn how I spent your money. Otherwise it’s just an interesting status update on my various projects.

I uploaded Zim 0.58, WordPress 3.5 (and I had to file a ticket about the availability of sources of minified javascript files — again) and another security update for python-django (696535).

I contributed some patches to improve debian-installer support in live-build. I also added a work-around for bug #652946 in live-installer and committed a fix for this same bug in a jessie branch of partman-target.

I also prepared a bugfix for a counter-productive behavior of choose-mirror (#695261, it was not possible to override the codename of the release to install via preseed if you install from a CD with a full base system).

I discovered an oddity in the Packages.diff/Index file for the architectures armhf and s390x, I reported it to ftpmasters in #696792.

(All those issues were discovered while working for a customer)

I spent quite some time on Debian France this month again. I started by setting up an internal gitolite to manage our accounting/administrative documents.

Then I updated galette, the web application that we are using to manage our database of members. In the process, I filed two bugs that we discovered. I immediately tested Galette by registering 4 members that joined during the former mini-Debconf in Paris.

We have plans to automate the membership renewal process so we have opened a Paypal account. This month we also cleared the last steps so that I and Sylvestre Ledru have full control on the Debian France bank account.

I also registered the new officers at the “Tribunal d’instance de Sarreguemines”.

During the last mini-debconf, I discovered Salt (thanks to Julien Cristau!) and since I had to switch some servers of mine, I took this opportunity to upgrade to wheezy and try out salt at the same time.

It took much more time than expected but the result is pleasant. The configuration of all my servers is now well documented/specified in a central Git repository, and moving services is much easier than before.

This is a simple tip but an important one: when you’re installing Debian, take the time required to ensure the machine is connected to the Internet with a wired connection. If you have DHCP available, the debian-installer will use it to configure the network. 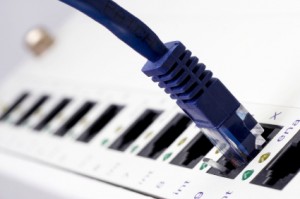 Why not use the wireless connection?

Because debian-installer in Squeeze doesn’t support WPA encryption, but only WEP. So if you’re using WPA, picking the wireless connection will lead to no working network during the installation and this is to be avoided.

If you’re still using WEP, you can go ahead of course.

If you only have a wireless connection with WPA, your might want to help the debian-installer team and add the required support. Matthew Palmer did some work on it a few months ago (see this mail and his branch in the netcfg git repository) but he resigned from the d-i team in the mean time. So WPA support is still not available in the wheezy debian-installer.

Why is the network so important?